What does a typical day look like in your career?
I wear many hats and do many different things. I am partly a professor. I teach courses in piano, piano literature, and piano pedagogy. I am partly a private music teacher, and I have a studio of students, some composition and theory, some piano. I’m also partly a composer and performer. The thing I put most of my time into is the professor and teacher part of it. Now that school is starting up, I’m planning my syllabi and doing research, helping students with educational goals and talking with their parents, etc.

How did your undergraduate studies at Blair shape your career?
I would say that academically, Blair and Vanderbilt made things a lot things easier in preparation for my graduate studies. The strong academic background really strengthened my research and writing skills. I’m really thankful for the kind of curriculum that we had. It also allowed me to have time to do other things, spend time in new areas.

I really appreciated that I still had access to the awesome liberal arts education, even though I was getting a degree in music. Many schools try to make you overspecialize, but I had the opportunity to take classes in so many different areas. One of my favorite classes was a public speaking class. Now every time I give a lecture or speak at a conference, I’m brought back to my public speaking class.

I can’t say enough about my private instructors and chamber coaches, because they invested so much time in me and helped so much. Teachers at Blair have the opportunity to really invest and spend time with each individual student because of the small size and structure.

Are there things you incorporate in your daily work that you learned at Blair, maybe from a faculty member or a master class you participated in?
In terms of my private lessons and approach to performing music, especially with Dr. Craig Nies, he taught me how to “paint” at the piano. He taught me about tone color and timbre, and I think that is something that I carry with me and that helped set my playing apart.

When I’m lecturing in piano pedagogy and piano literature, it helps to go back to one of Stan Link’s classes,  “Music, Arts and Ideas,” in which we discussed the connection between two seemingly disconnected items or themes. I bring that up a lot in my work and lectures.

I also learned a lot about dealing with people in some of my music classes. Collaboration is something you take everywhere, in all the work you do. As a musician, you are always working with people and collaborating, and those are skills that are important and that you’ll never forget. 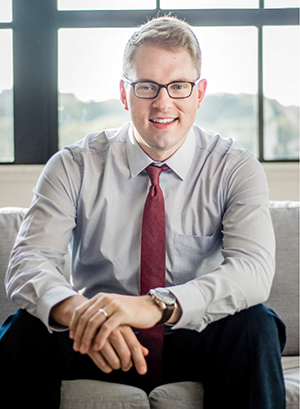 What is your favorite memory of Blair?
I have this fond memory of rehearsing late into the night with some of my ensemble friends. All the Blair Witch Halloween dances we ever had were also hilarious and so much fun! Honestly, there were also a few moments in student recitals that I’ll never forget, either from other students’ performances or in how my peers received some performances that I gave. Some of my degree recitals, I received a great amount of support from people — teachers and friends — who really valued and supported me, and that was wonderful.

So far, do you have any favorite memories or experience from your life as a professional musician/teacher?
I had a student, she meant it as a compliment, say, “Andy it looks you’ve aged for us, and we appreciate that.” It was kind of funny. I think that one of my fondest memories (as a student), was a class where we had a moment of discussion (a class of piano majors at Cincinnati College-Conservatory of Music). The question was, “Where do you want to be in five years?” He called on me, and I think because of some of the seeds that were planted at Blair, I said “I want to work at a place that values me being there.” The teacher was very surprised by that answer. I think that this has helped me embrace my role in everything that I do. I never realized that I have to do that. You could be good at X and Y, but you might not want to do either one. I’ve had confusion with the things you want to do versus the thing you are good at…. I’ve realized it’s important to embrace a perspective that helps you bring value to what you do. Take pride in everything you do and keep an open mind to new things.

What do you think is most important in maintaining a successful music career?
Being organized is No. 1. I think one of the “bumper sticker” things that I’ve learned recently, too, is: Every day, especially when I’m surrounded by new people, it’s really helped me to ask, “How do I learn from these people, and how do I serve these people?” If that’s a base routine for everything you do, then that’s a great source of energy. In graduate school, I had to learn the value of rest and cardio. And ask for help when you need it. I have to work on that a lot. But that’s an important part.

If you could apply to college again, would you still choose Blair? What sets Blair apart from other programs?
You have conservatory training inside an amazing liberal arts school. That’s a headline that people already know, but people may not realize it’s real! You have options and choices. One of the best things you can do is not just give students choices and not just give them training, but give them both! I also got so much attention at Blair. The small size really was one of the best things.

What advice do you have for students interested in being a music major and going on to pursue a career in music?
I would say, first, try new things. If you have a vague amount of interest in it, try it! Second, work hard and be nice to people. Because of the friends I made and how hard I’ve worked, that’s how I’ve been able to do anything at all. I’ve put myself in new situations, worked hard at building new skills, and mainly been the kind of person other people like to work with. That’s been very fruitful for me.

We are lucky that Blair is located in such a fantastic musical location. Just for fun, could you tell us your favorite Nashville venue to see live music?
I would probably say 3rd & Lindsley, and The Basement on the west side.