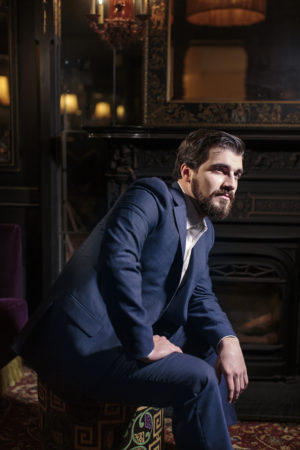 What does a typical day look like in your career?
It depends! There are two different kinds of typical days. At least right now, gigs are kind of one month on, and then one month off to prepare for the next one. When I’m on a gig for three to six weeks, I generally have two three-hour rehearsals a day, six days a week. So I usually lounge about and have my breakfast, start warming up about a half-hour before the rehearsal, and then work on the piece with the stage director and conductor for six hours, with a lunch or dinner break in between, depending on the schedule.

The other kind of typical day is when I’m not on gigs, preparing for the next one. Those days I have about three or four coachings for about an hour each week, and otherwise I’m just at home relaxing and trying to be as helpful as I can to my fiancée!

How did your undergraduate studies at Blair shape your career?
Studying with my Vanderbilt voice professor was a great step in the right direction, and every step of my voice training is super important. Working with Gayle Shay was also fantastic. She is a wonderful stage director, and encouraged us to supplement our acting training with classes at the Vanderbilt University Theatre, which I did.  The other major bonus of being a vocal student at Vanderbilt is that the program is undergrad-only, so I got a lot of attention from my teachers and also, maybe more importantly, time on stage.

Are there things you incorporate in your daily work that you learned here, maybe from a faculty member or a master class you participated in?
Of course! Bringing truth into my acting, which I learned from Dr. Shay. I had done a lot of theater growing up, but there was always a little more schtick than necessary when I did roles. More caricature and less of the actual character. The lessons I learned from Dr. Shay and the VU Theatre were extremely important to the career I have now.

What is your favorite memory of Blair?
It would have to be doing Cosí Fan Tutte with Tom Mulder, who was one of my two best friends during undergrad. He played the tenor across from me. It was a blast! 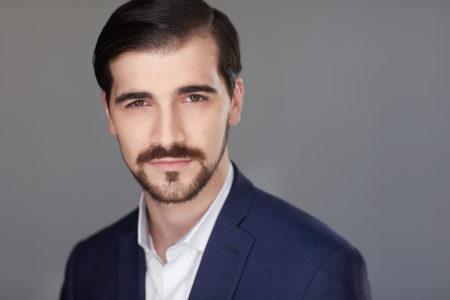 So far, do you have any favorite memories from your life as a professional musician?
Winning the Lotte Lenya competition was a big moment and was very affirming in terms of my career. Otherwise, it’s really the shows that I’ve loved. There’s a beautiful show called The Little Prince, based off of the children’s book by Antoine de Saint-Exupéry. It’s a family show, but the music is just gorgeous. I played the role of the pilot. It’s a moving piece, and a very magical experience to take part in it.

Another favorite memory was doing a show by Tom Cipullo called Glory Denied, which is about a Vietnam war vet. I got to play the leading role, and the show was with my “home company,” Houston Grand Opera. The dramatic range in that role was so extreme, which is somewhat unusual for baritone roles, as they don’t normally have such a range of emotions. (Baritones) are usually just the villain, the father, the best friend, etc.

What routines, ideals or practices do you think are most important in maintaining a successful music career and balance in your life?
A working singer once told me, “Getting hired is one thing, but getting hired back is far more important.” At the end of the day, people have to enjoy working with you if you want to keep getting hired. Your playing or your singing can get you in the door, but unless you’re Renée Fleming or Joshua Bell, it’s your performance as a colleague that will keep getting you asked back. For me personally, I’m trying to be an actor in a singers’ world. I’m trying to make that my trademark. It’s very important to make your art when you walk in the room. You need to play to your strengths and anything that makes you unique. You should play that up.

What sets Blair apart from other programs?
The fact that it’s undergraduate-only is so unbelievably important. There are many schools around the country that are not, and you do not get as much performing experience. I personally think that stage time is key. I would for sure pick Vanderbilt/Blair again for that exact reason. It is so important not to wait until graduate school to have that time on the stage, doing the craft.

We are lucky that Blair is located in such a fantastic, musical location. Just for fun, could you tell us your favorite Nashville venue to see live music?
My favorite thing to do was to go see the Vanderbilt Melodores when they were in concert, wherever they were! I was actually a part of the group for a few years, but even after that, I still loved to go see their shows.